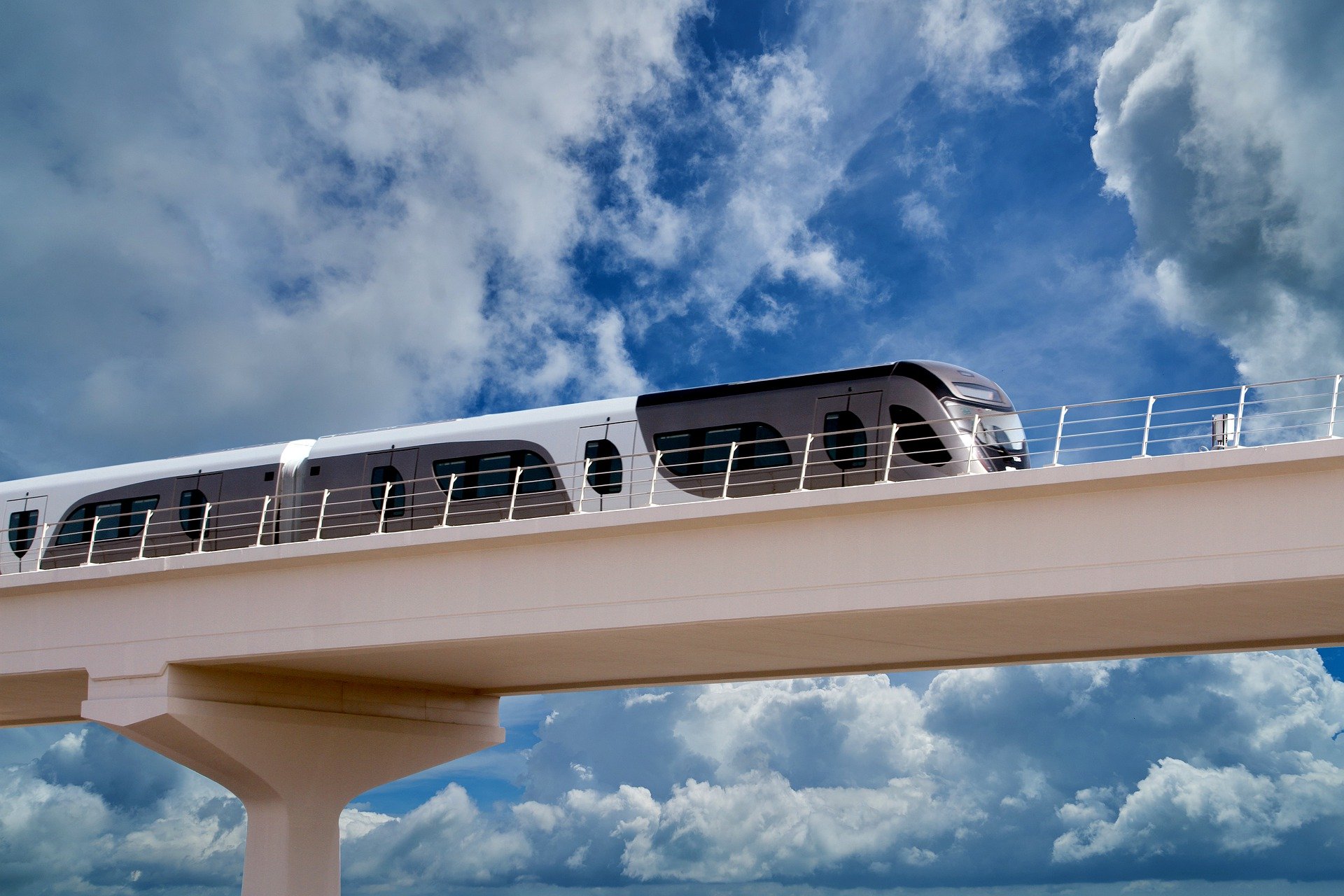 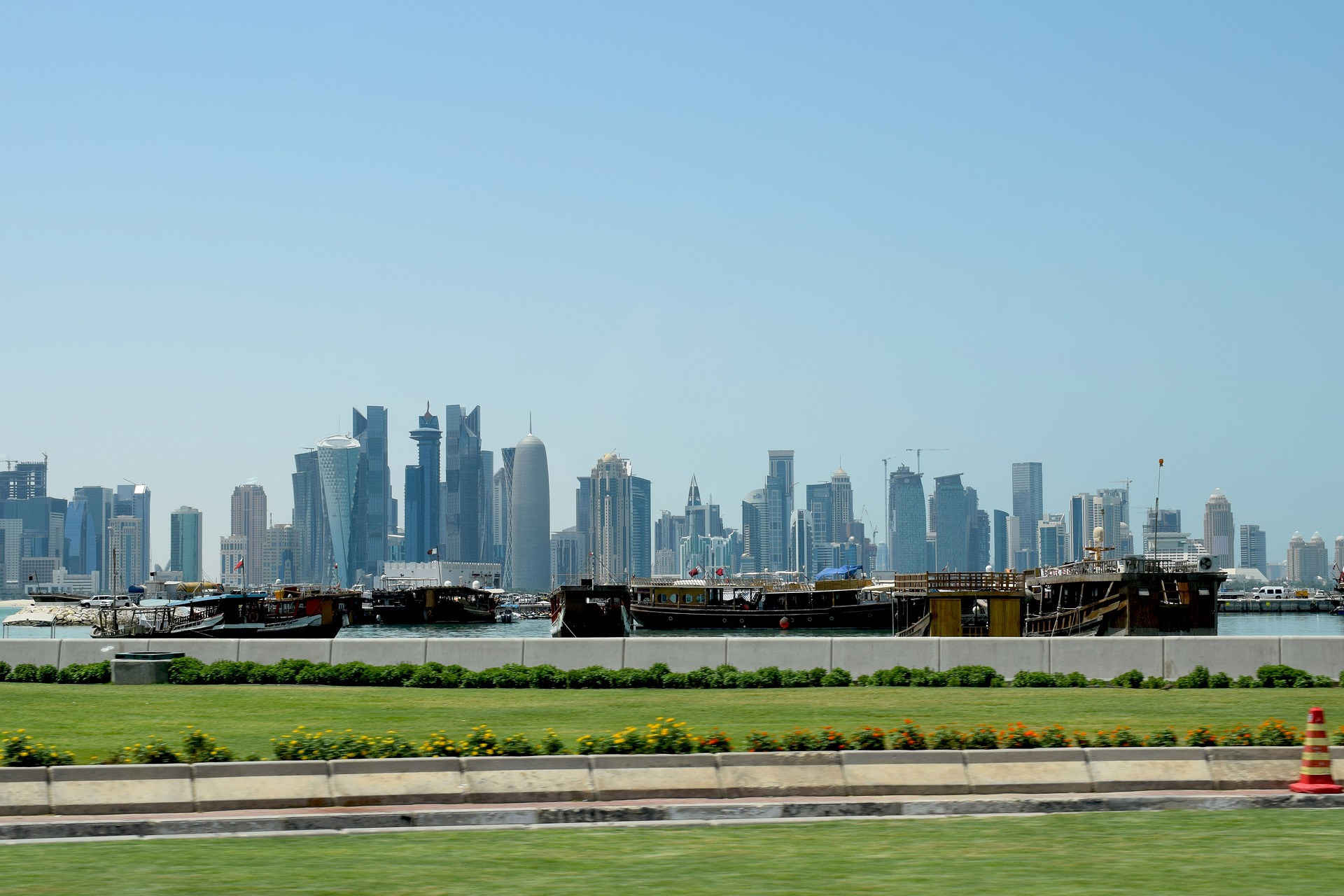 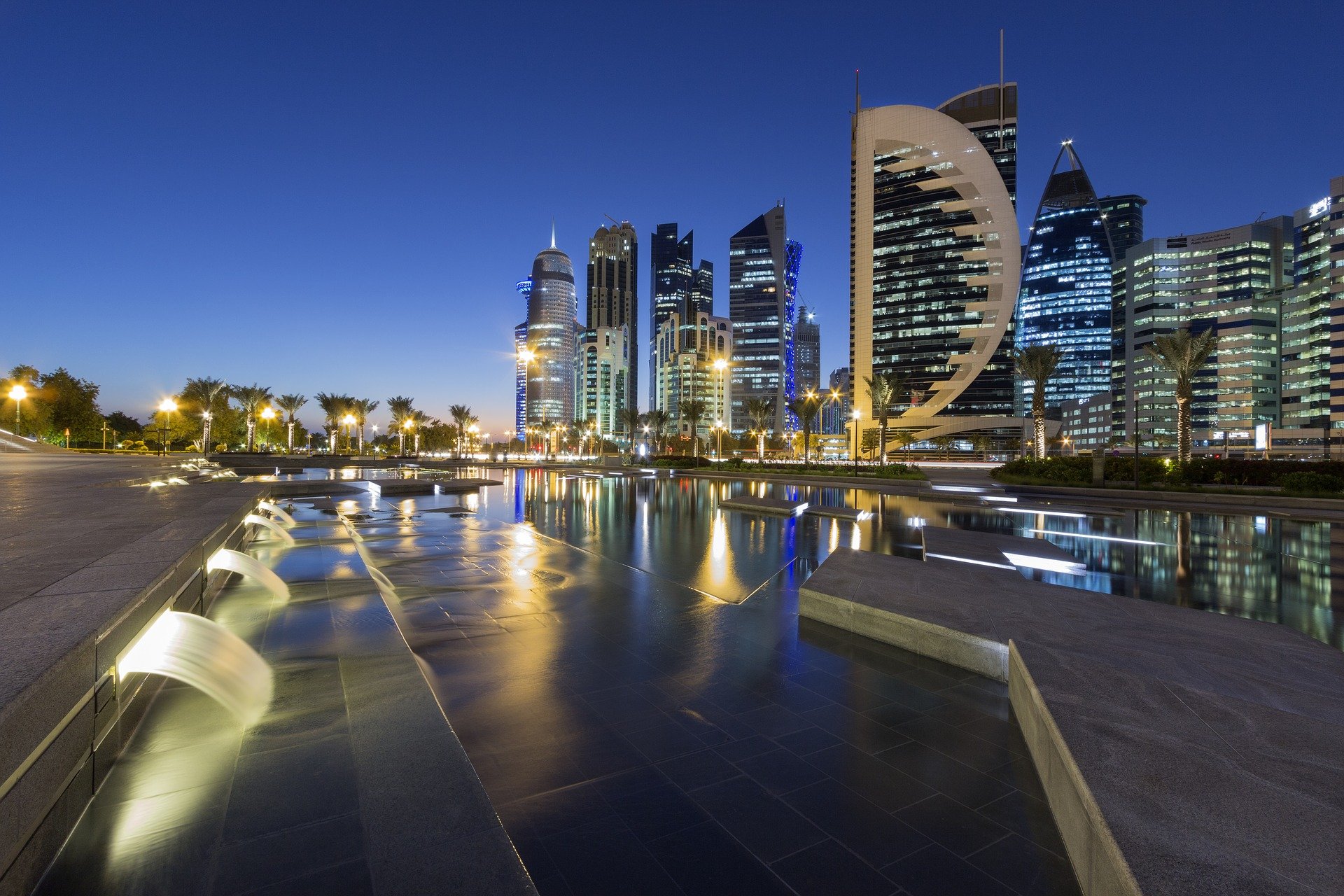 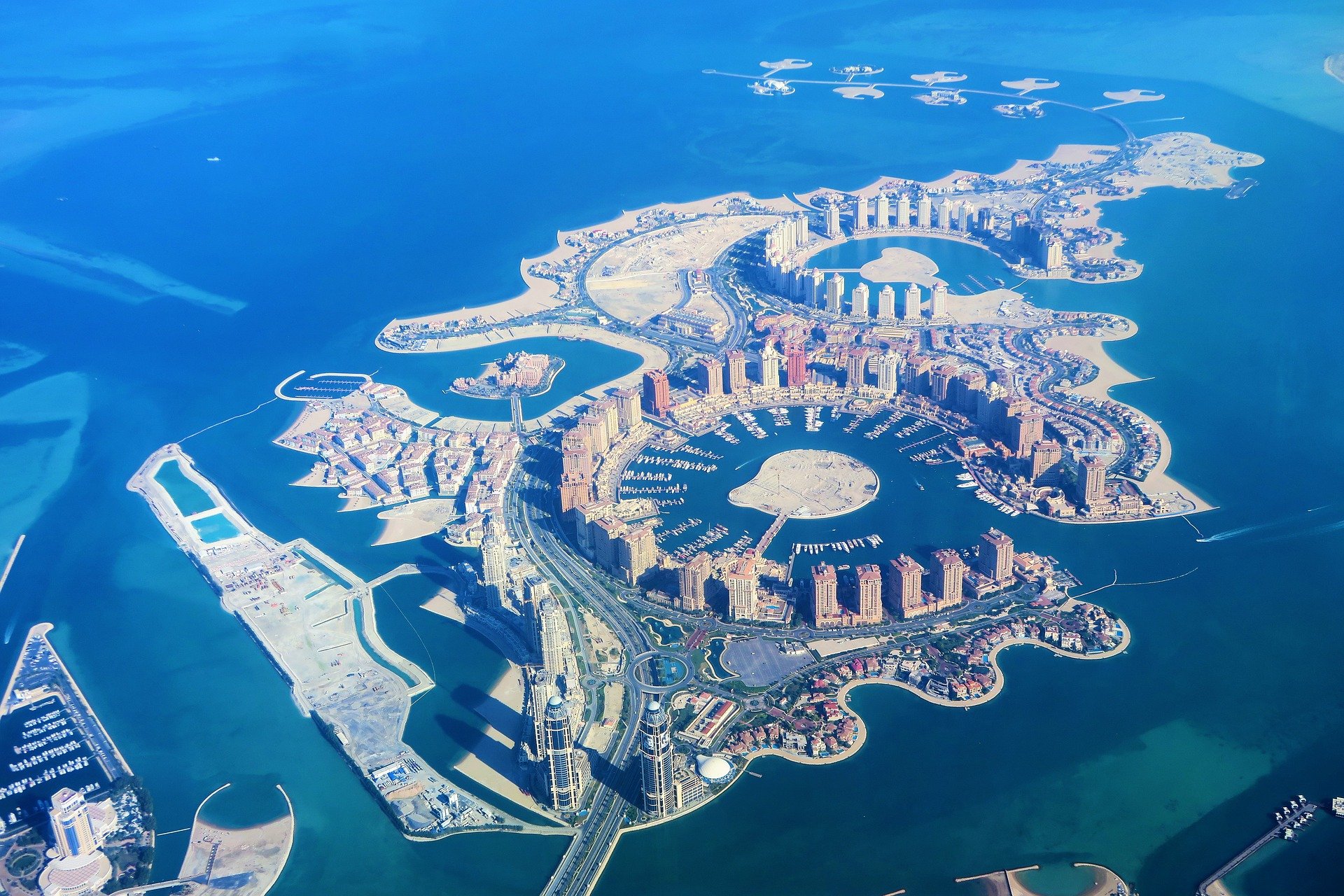 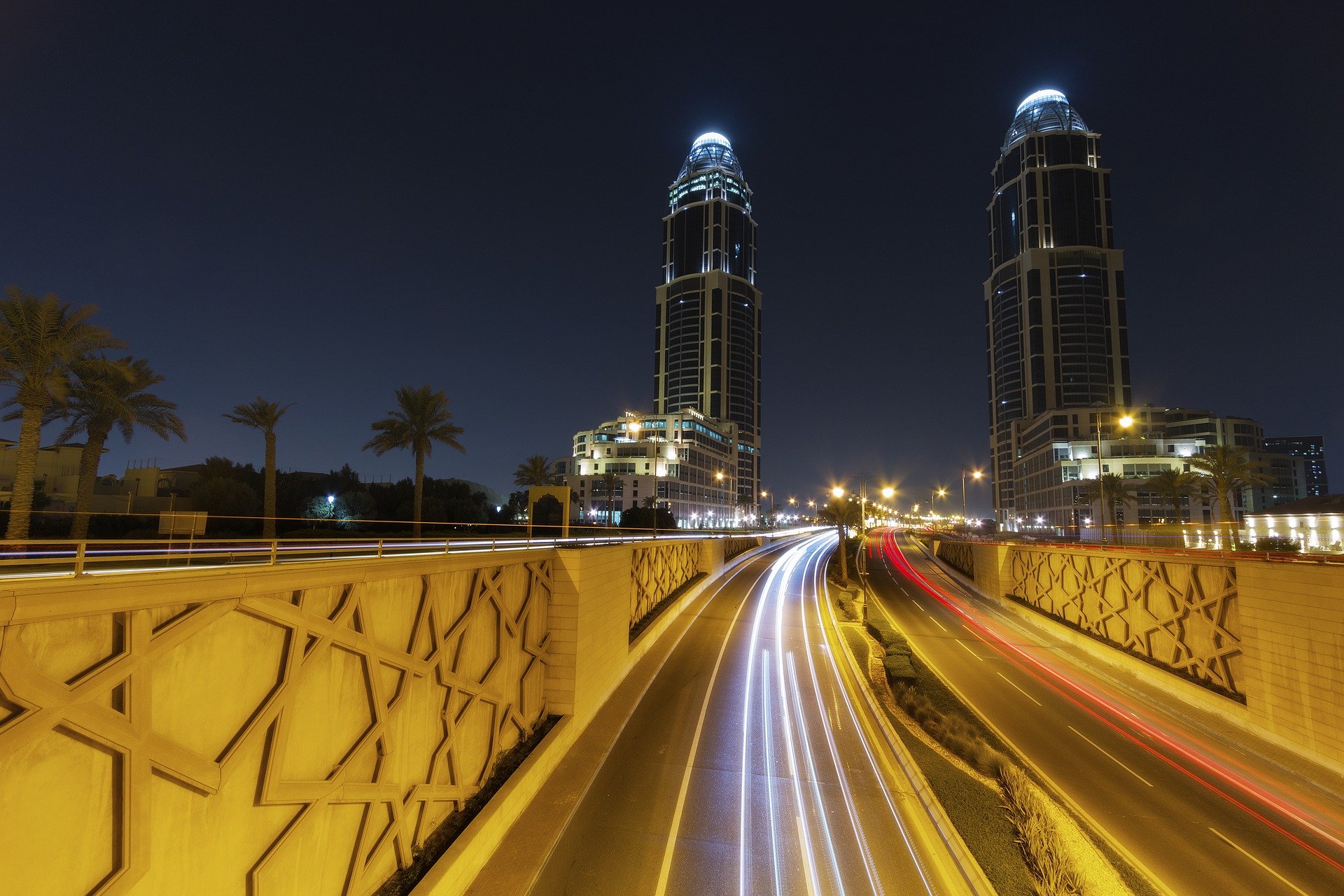 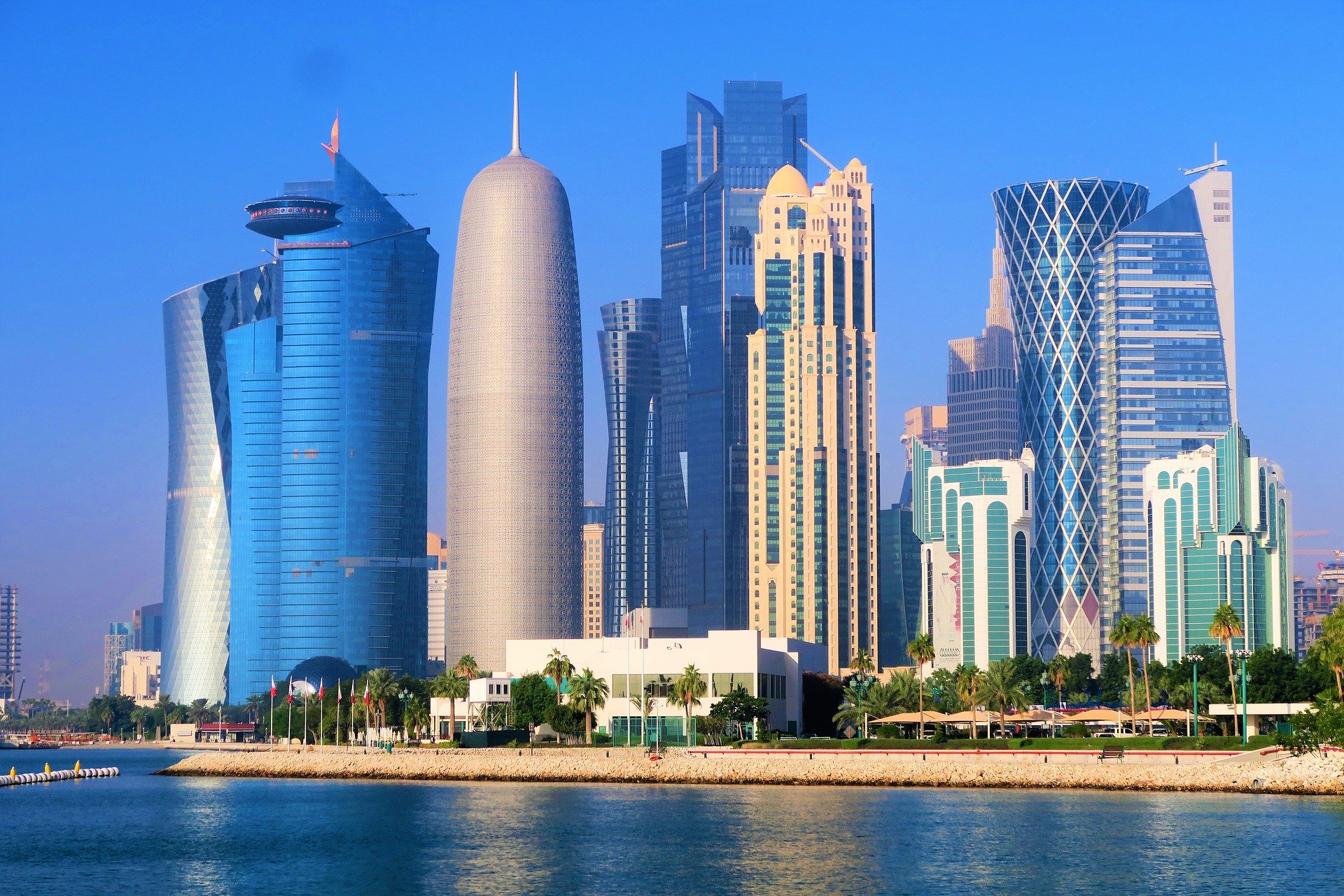 Qatar is one of the smaller Arab Gulf states in terms of population (estimated at the end of 2007 at 1.5 million) and geographical area (11,437 square kilometers). It is a peninsula situated midway along the western coast of the Arabian Gulf, with a 550-kilometers long coastline that bounds the country to the west, north, and east. There are several islands that also form part of the territory of Qatar, the most important of which from an energy infrastructure perspective is the island of Halul, which accommodates significant petroleum storage and pumping facilities of the State.

The landscape of Qatar is generally flat and arid desert terrain. The desert areas are predominantly low lying with the exception of scattered hill formations in the northwest and rolling sand dunes in the southeast areas.

The climate is characterized by a mild winter and a hot summer. Rainfall in the winter is slight. Temperatures in summer are extreme. The period from October to April is generally pleasant in particular for sports and other outdoor activities.

The population of Qatar including expatriate workers and their families is estimated to be 1.5 million (December 2007 est.), most of which is resident in Doha, the capital city. A number of towns and villages, mostly the industrial cities of Dukhan, Mesaieed, Ras Laffan, Al Wakra, and Al Khor are the other population centers.

Arabic is the official language, although English is widely understood and spoken. Official correspondence and the laws and regulations are published in Arabic.

Islam is the official religion and the Islamic Sharia is the principal source of legislation in the country.

Doha is the capital city as well as the seat of Government. It includes the country’s main seaport as well as the international airport. It has an advanced road system that connects with the international road network and it is Qatar’s cultural, commercial, and financial center. With the influx of an increasing number of foreign skilled and semi-skilled workers, Doha is currently undergoing a process of rapid economic and infrastructural development.

Al Rayyan located about 10 kilometers to the west of Doha, is the largest residential locality outside of the Doha municipal limits.

Al Khor is a coastal city 57 kilometers to the north of Doha with a port. The Al Khor Municipality includes the Industrial City of Ras Laffan.

The Ras Laffan Industrial City is situated strategically along the northeast coast of Qatar, with proximity to the North Field, the largest natural gas field in the world, and situated on the international maritime shipping route between Asia and Europe. This unique position enables its energy products to be transported efficiently and expeditiously to the major markets of the world.

Mesaieed is the largest industrial city in Qatar. It has a large seaport as well as the principal terminal for the export of oil and other hydrocarbon products. The beaches of Mesaieed with their fine sand and adjoining sand dunes constitute a major tourist attraction of Qatar.

Al Wakra is situated between Doha and Mesaieed, 15 kilometers from Doha, and has a small harbor for fishing boats.

Dukhan is the onshore oil production center and is situated halfway along the western coastline of the Qatari Peninsula. Its development has been ongoing since the first exploitation of the country’s oil reserves in 1949.

Qatar is known for its famous Al Jazeera Network of Satellite Television Channels. In addition, there is the national Qatar Television and several daily newspapers and journals including a few English language publications. Local Arabic and English radio and TV channels are aired on the FM bandwidth. Satellite and Cable TV offer all international channels including BBC, CNN, ESPN, HBO, Star Movies, etc. In addition, there are several modern movie theatres in Doha showing new releases. Cable TV and cinema are censored.

Friday is the Muslim day of rest and all offices and most large shops are closed. The major holidays observed in Qatar are as follows:

In addition to foreign schools that serve particular expatriate communities including American, French, Indian, Japanese, Norwegian, Philipino, and Pakistani, the Ministry of Education has recently undertaken measures to provide world-class educational opportunities to Qatari nationals and foreigners. Some of these efforts are through the Supreme Education Council and the Education City.

The Education City: The Education City is a national initiative for the setting up of a community of educational institutions that serve the educational needs of an individual from early childhood to completion of post-graduate study. It is envisioned as a hub for the generation of new knowledge. It provides researchers and trained graduates with state of the art research facilities and the opportunity to collaborate and share knowledge and ideas.

Endowed with immense energy resources and on account of its central geographic location between East and West, Qatar is vying to serve as a major transit point for air traffic between Asia, Europe, and the Americas. To this end, Qatar’s state of the art New Doha International Airport is expected to go a long way.

Following the 2006 Doha Asian Games, public transport within Qatar has seen the introduction of an efficient intercity and intra-city bus service operated by the company that was contracted for transportation services in the Games.

The telecommunication sector in Qatar has been opened up to competition, and with the award of licenses through public tenders to international consortiums in the GSM as well as the public fixed telecom networks, the familiar Q-Tel (Qatar Telecom) network no longer enjoys a monopoly.

The premier health services institution in Qatar is the Hamad Medical Corporation which operates the state-owned network of medical centers in Qatar including the central fully equipped and staffed Hamad Hospital. Qatari nationals are entitled to free medical treatment from the state’s medical facilities while foreign residents are required to obtain health cards issued by the Ministry of health for a nominal fee. There are many public health centers throughout Qatar. These provide medical and dental treatment to Qatari nationals for free but charge a nominal fee to non-nationals. There are also private clinics and surgeries operated by doctors and dentists in private practice.

The Government runs a major housing program for nationals. Nationals of GCC countries and other foreign nationals are able to buy real estate in specified areas in Qatar. The Pearl Qatar real estate project, where luxury apartments are marketed as a major attraction for people looking to settle next to sandy beaches on the warm waters of the Arabian Gulf, offers the added advantage of owners being able to invest in the booming Qatari economy.

Lightweight cotton clothing is recommended during the hot and humid months between April and September. Medium-weight clothes are advisable for winter, particularly in the evenings. Modest dress in public is advisable, although appropriate sports attire is not considered odd at sports clubs and jogging tracks.

Qatar is a Muslim state, and the heritage of Islam is rooted in the Qatari character. Islamic customs govern the general way of life and care must be taken to respect this in such matters as the dress code.  The importation of alcohol is strictly regulated and its consumption by non-muslims is permitted but not publicly. Foreign nationals can obtain liquor permits and the major hotels are allowed to serve alcohol to guests in restricted areas. Qatar prohibits the brewing of and trafficking in alcohol. Drunken behavior in public or driving under the influence of alcohol is an offense punishable by imprisonment, a fine, or both.

All foreign nationals, except those from the GCC countries, are required to have visas and residence permits if they wish to reside in Qatar for the purpose of employment. Applications for employment visas are normally processed at the initial stage through the Qatari Embassy or Consulate in the home country and must be based on a formal offer of employment. The Department of Immigration is responsible for issuing such permits. Business visas may be arranged by local business counterparts, although tourists and businessmen from Western countries and of certain other nationalities can have visas for a stay of limited duration stamped on arrival at the Doha Airport.

Only businesses incorporated or otherwise formally established in Qatar can sponsor foreign employees into Qatar. A person employed in Qatar may not, except for limited durations with official permission and his or her employer’s consent, work for anyone other than his or her sponsor. Further, a The employee, after terminating his relationship with the employer, may work for a person after notifying the Ministry of Administrative Development, Labor and Social Affairs of the end of the contract period, or moving to another party by mutual consent between the worker and the employer if the contract period is valid.

All residents driving vehicles in Qatar are required to hold a valid Qatari driving license. These are obtained after the residence permit has been issued, and usually involve driving and eye tests, although licenses issued by authorities in certain countries may simply be swapped with a Qatari driving license without the need to take the driving test.

In addition to being a member of the United Nations and the Gulf-Cooperation Council (GCC), Qatar is a member/signatory of the following international agencies and organizations.

All residents of Qatar are required to carry identity cards issued by the Ministry of Interior.